It was horrific, they denied her her prescription of Ivermectin,lots of things went down.

The hospital staff knew what they were going to do to her from day one.They denied her the ivermectin, an advocate said she had the right to try .
They neglected her ,This is a high profile case. articles have been written about what happened.Talk radio,,, I have every detail documented .
They murdered my healthy Mother .

What types of activism: I have relentlessly been pursuing a lawyer, telling many what happened . 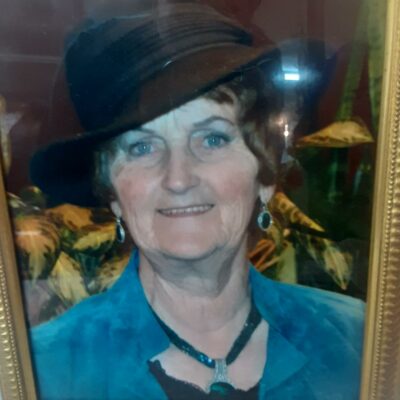 Police were called on me for asking questions, they were robotic,knew they would even killing. My Mother .I have a lot of information,details.

My precious Mother was taken to the ER by my brother Oct 8,2021, The Dr said she had great BP and heart rate, but had Covid, sent her home with oxy and a nebulizer. I spoke to her on the 9th she sounded great, said she felt good, Then Sunday she called my Brother said she wasn’t sure about the Oxygen (like not maybe working right) I believe my brother and his hypochondriac wife got my Mom worried, so they took her back to the hospital (Oct 10th) My Aunt and an advocate had a meeting with Drs and nurses to try to have them give her prescription of ivermectin, they said NO, that it wasn’t the “Protocol”.  Then the advocate called the Attorney General, put him on speaker phone, he told them MT has the law of “Right to Try” they still said No.

I live in Texas, I rearranged my work schedule and flew to Helena on the 12th, I told the hospital that I would like the POA papers ready for me when l arrived. When I got to the hospital around 4:30, I got the papers and headed to the Med floor to see my mom. I got all the way there they asked who I was seeing, then they said the floor was closed and I would have to wait.

I waited and waited, they still would not let me see her, I told them I wanted my Mom to sign the POA, and also to have it say specifically NO remdesivir and no ventilators.

They kept giving me the runaround, I was told to go to go to The ER and wait and a person would get the POA for my mom to sign. A security guards said to me that there was no notary and to come back in the morning, I’m like No, I want it signed before I leave (I knew what hospitals where doing) He tried to provoke me, then told me to leave, the first day was just the start of the insane behavior by this hospital.  The Lt. Attorney General was called, and the Hwy Patrol was sent to try to allow me to see my Mom, we instead filled a report out.

Next morning, I arrived at the hospital, the nurses were all ‘nicely, nice and handed to me the POA.

Every day was a fiasco, they wouldn’t let me be in her room, I saw her through along window, we texted and blew kisses to one another.  Every day it was something, they would up her oxygen, or give her more drugs. I would call the two oxygen companies to see about getting home oxygen for her, but it had to be lower.  My quest was to get my precious Mother out of the hospital before they killed her.

She started doing better, as she had been getting ivermectin in a frosty every evening (I brought it to her) The 21st, she was doing good, I knew in my heart I would get her out on Friday.  I got to the hospital that morning, they had given her something that made her way worse, she was shaking really bad, from that point she went downhill, I truly believe they gave her that drug on purpose to do her harm.

One day I asked a Dr why they changed her room and when was the last time that they did an X-Ray on her chest, he got very pompous asked who I was, even though I had just told him, he then said he wouldn’t talk to me, and told me to leave, I thought what on earth ???

The police were called, the hospital treated me like I was a criminal.  I also filed a report against the hospital. For I knew what they were doing.  I was told I was no longer allowed at the hospital; it was such insane behavior on their part.  I tried to see about getting back in through a court order.  So, for close to 3 days, I could not be with my Mom.

My Mom wrote the Dr a note, saying for our well-being to allow me back in.  I was allowed to go back to the hospital on Thursday, my Mom was doing good as she still had ivermectin in her system. I felt at this point I would get her out the next day.

I’ve been calling oxygen supply places, so when I left the hospital Thursday night, I had lots of hope and looked forward to getting her the oxygen she needed so I would be able to take her home.

The next morning her bed was moved further away from the door, she was breathing erratically, short hard breathes, moving her entire body, I asked the respiratory therapists what was wrong with her? and why was she breathing so heavy, he acted like it was no big deal, called it “puppy breaths”.  Then the “New” Dr showed up, introduced herself, she was a traveling Dr from New York. She seemed more like an actor, she was “different” lots of drama.  I asked why my Mom was breathing like that. Then I asked her what they gave her?  I said she was doing good when I left here last night, because we had been giving her ivermectin. The Dr, never responded, just walked off.

On Sunday we had a prayer vigil for my Mom, family and friends joined us outside of the hospital, we prayed and sang.

Monday they finally opened her room for family and friends to go in.  The Drs, nurses and administrator said all they could do now is comfort care for her (I have my own thoughts on that, meaning we won’t help, her, and we will kill her).  They wanted to meet with us (the family, my siblings, Aunts, Uncles).  So, we met that afternoon, the NY Dr stood next to me as I was seated, talked about blah blah, to me it was gibberish, lies, deceit. She said more than once “we won’t resuscitate”.  I looked at her, and said you most certainly will, it says it on her POA, a question asked to my Mother, would you like CPR performed.  My Mother said yes.

The Dr then said well, if we resuscitate we will have to intubate. I said No, you don’t need to use a ventilator to perform CPR. It’s 30 compressions to 2 breaths. She didn’t say anything else.

We went to my Moms room, family saw her, my Sister called me out of her room for a few minutes, then all the sudden I heard “flat line in room 3112”.  My heart sunk, I ran so fast to her, it was chaotic, there were so many nurses and a Drs in her room, doing nothing, just watching, like to be a witness.  I remember the little security guard grabbing my arm, very strange, I said let go of me. Then the “traveling Dr from NY) grabbed my arms, saying let her go, bad that they weren’t going to resuscitate, I said yes you will, then I told the nurse to do CPR, she immediately started doing it, my Moms heart started for a brief moment. It was like a bad dream I was in, I thought how could she be gone, she was healthy. I prayed asking the Lord to raise her like he raised Lazarus up.

The heartache I felt at that moment was like nothing I’ve ever experienced.  You feel numb, like it’s not really happening.  I knew I wanted an autopsy done. I made calls right away, she wanted to be cremated and I knew they would try to hurry to do it.  Her death (murder) is being investigated by the DOJ bad Attorney General.  I did a 3 hr interview with them, I make calls to them, they assure me it’s still being investigated.

I’m the only one in my family that is pursuing to bring my Mothers killers to justice. I have many friends that have given me information who have researched to find the truth.  I am beyond grateful.

My precious Mother was one in a million, intelligent, beautiful, both the inside and outside, outgoing, a doer. She was adored by so many, people relied on her to get things done.
She traveled with me, we had businesses together, we were close.  I loved my Mom beyond measure.

These monsters took her away from me, for money.  The Bible states “The Love of money is the root of all evil”.  Drs and nurses take an oath to preserve life, they now push that aside to make money. They know exactly what they are doing they can’t deny it. They all will be held accountable for murdering many, they will pay on earth and beyond.

Loss of my Husband