Denied monoclonal antibodies, bad communication with the doctos, very cold and not compassionate

Days on a ventilator: : 7days days 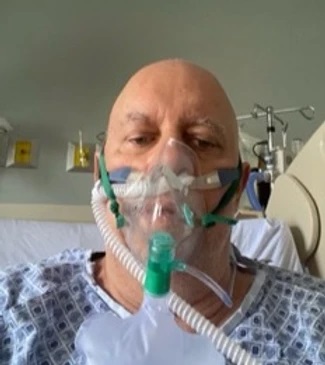 I am a kidney transplant recipient. I celebrated 22 years in June. I was the sick one basically our entire marriage. We married when I was 20, then had two children. Then went on dialysis at 27, transplanted at 29. Two weeks after my transplant, my mom passed away from ovarian cancer. I am familiar with trials in life and loss. But I am the sick one. So in August, out of eight of us family members (my husband, son, sister, mother-in-law, father-in-law, son-in-law, daughter (who was pregnant with our first grandchild,) and myself). Seven of us got Covid, and five of us were hospitalized. I was the first one to be hospitalized on August 20th. Being a transplant recipient on immunosuppressive, I knew this wouldn’t be good for me. The day I was hospitalized, my husband had gone to the ER earlier in the day and was prescribed steroids and an inhaler. He was so worried about me, so I was glad he went and was also thinking about his health. I was released from the hospital on August 23rd. My sister was admitted to the hospital on August 23rd. The next day my husband was struggling to breathe, and what he had been given at the ER didn’t seem to work. I drove him to the hospital on August 24th. Four hours later, I called two ambulances to my house for both of his parents who lived with us. On August 27th, my sister was released, and I had her stay at my house because she lives alone and came home on Oxygen.

That afternoon we found out my mother-in-law was not going to make it. Then my husband was moved to the ICU on that same day. My father-in-law went into afib when he found out my mother-in-law wasn’t going to make it. They got him stabilized. Telling my precious husband his mom wasn’t going to make it, along with what had happened to his dad, was one of the hardest things I have ever done. Of course, his first concern was how our children were taking the news about their grandmother. His mom passed in the early morning of August 30th. I was so upset with the hospital. Because my husband, who was struggling in the ICU on a high flow machine, was the first person, they told at 5:30 am.
They went into ICU and told him before calling me or any of his other siblings!!! A doctor was with my father-in-law just in case he couldn’t handle the news. Lots of tears were shed that day. My husband had his 57th birthday in the hospital on September 1st. My father-in-law was moved to a rehab on that same day. That evening my daughter (the only family member to not get Covid. PRAISE GOD!!) was induced to have our first grandbaby. She was induced due to stress-induced high blood pressure because of everything that was going on with the family and then losing her grandmother. She gave birth to a beautiful baby girl on September 2nd. I was able to FaceTime with my husband right after she was born. He saw her in the baby warmer and heard some of her first cries. He was so excited and cried because she was so beautiful, and he was so excited to be a “Pop Pop.” I encouraged him to get stronger so he could hold her. He said, “I can’t wait to hold her!”.
That weekend was great. His high flow machine was turned down. He was only on the nasal cannula. He was eating and getting stronger. On September 7th, the doctor told him he was doing so well that he was going to be moved to a step-down room the next day. We were thrilled. 9:30 pm that night, I was called by one of the nurses in a panic, telling me they needed to intubate my husband and he wouldn’t do it. So I talked to him and asked him where his peace was. He said his peace was to come home. I asked him if he thinks being intubated will bring him comfort and bring that peace? He said yes. I told him to continue fighting and that I loved him. He said, “I am fighting, and I love you.” My heart was broken. I had to tell both of my children that their dad had been intubated. Every day was a roller coaster of ups and downs. On September 13th, they wanted to put him on dialysis, and since I understand that part, I had my kidney doctor get involved. His second opinion was no dialysis, and he gave meds that corrected the numbers that the hospital was concerned about. His vent was turned down that day, and the doctor was pleased. It was forward progress.

Tuesday morning September 14th at 7:00 am, the hospital called. It was my husband’s intensivist. He said, “Cynthia, this is Dr. H; we lost Eric.” That was it!!! My husband was in the hospital for a total of 22 days. All I get is “we lost Eric”? The last time I touched him was when I dropped him off at the ER on August 24th!!! My world turned upside down!!! He had ZERO comorbidities!!! I AM THE SICK ONE, NOT HIM!!! My household went from 5 people to 2 people in 4 weeks!!! I have had some kidney decline since having covid. My husband was the sole provider of our house financially due to my health issues for so many years. My father-in-law is in a nursing home permanently. My new granddaughter has been the light in this darkness. Now I try my best to get through each day. I didn’t understand how a perfectly healthy man could die in 3 weeks when I recovered. After getting his medical records from the hospital. Two days before he passed, I found out that he went into cardiac arrest when they flipped him. His intubation tube fell out, and they had to do CPR on him to revive him. I called that hospital twice a day every day he was in there to get updates from his nurses. I was NEVER informed of this. Seeing this recently just made it all come back like a flood. There has to be accountability somewhere. I believe in the Bible. It says to plead the cause of widows. I am a widow, and I will plead the cause of all who have lost a loved one to Covid-19.