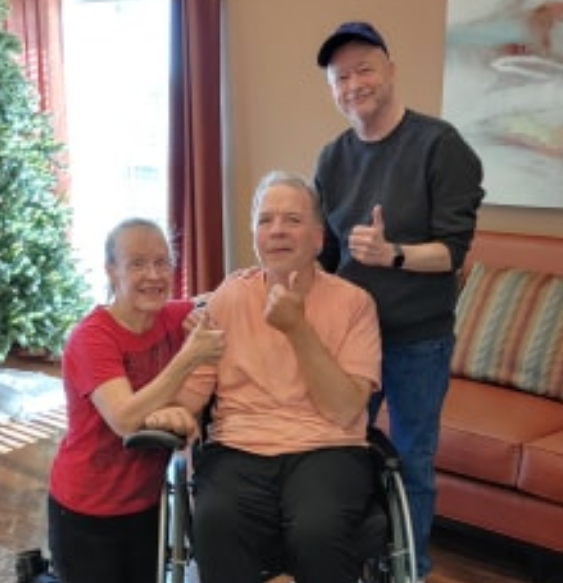 After 3rd booster she was not communicated to how ill husband was, and then had been lied to numerous times by nursing home

The hospital provided great care. But before Joe went to the hospital on 10/24/2021, the nursing home did not contact me, the wife, to alert me of his ill condition as a result of receiving the COVID19 booster. He received the booster on 10/20/21 and I was told he was ill on 10/24/21 when he was admitted to the hospital and then he passed away.

Symptoms: : A former staff of the nursing home informed that Joe appeared to be ill, very tired, wanted to stay in his bed for long periods of time.

Joseph Hughes, suffered a hemorrhagic stroke on 06/15/2018. As a result, and according to medical diagnosis, he would have to live in a nursing home facility for the rest of his life. The stroke left him unable to make sound personal and medical decision on his own.

The COVID19 mandates for lockdowns and to administer the vaccines and boosters, negatively affected Mr. Hughes. The lockdown mandates would not allow Mr. Hughes in person visits and not allow leaving the facility for family outings, for which he participated two to three times a week. The lockdown of the first nursing home left him depressed, refusing to eat and hydrate and consequently loosing an unhealthy amount of weight.

Mr. Hughes was transferred to a second nursing home to be closer to family in March 2021. Regent Care, was also known to be a better running facility in the county.

Both nursing homes (The Rio at the Mainland in Texas City and Regent Care in League City) communicated clearly and frequently with me, Grace Hughes (wife of Joe), in the event Mr. Hughes had a change in his medical condition, especially during the lockdowns.

On the day that he passed, I contacted family and close friends to inform of his passing. During one of those calls to a former Regent Care staff (activities director and friend), I was informed that he received the booster and that Mr. Hughes was noticeably ill. This former staff, who was also the ombudsman, sat with Mr. Hughes during his Skype visit with his out-of-state siblings and ended the visit early due to Mr. Hughes not feeling well. She alerted the staff to contact us only to be told to stop becoming to involved in the residents’ medical matters.

A week after his passing and his memorial service, I received his death certificate which indicated that his second cause of death was COVID Pneumonia. I pressed the hospital to update this information. After some time, the state amended his certificate to toxic sepsis which is correct.

The next step was requesting his medical records to both Regent Care and the hospital. Both facilities received the requested form and back up documentation. The hospital provided Mr. Hughes records but Regent Care Compliance did not. Regent Care stated many times that it could not fulfill my request due to lack of proper documentation, which is not true. And even after sending a “poison pen” letter (backup with “per my attorney” verbiage).

I contacted the records department of the facility for his records. At first the records manager was very cordial. Then her tone changed and also denied his records to me.

See my request for his records were specifically for that last week of his stay at the facility.

There is more to the story but this is it in a nutshell. But my goal is to expose the nursing home negligence of not informing me that Mr. Hughes was ill for an entire week, to expose that lockdowns killed many nursing home residents or left them in a extreme depression, and that the booster vaccine has lethal side effects to medically vulnerable people.

After exposing these truths, then authorities overseeing and mandating the covid protocols should spend time in jail, be treated the same as those affected by the mandates, or both.

I am a single parent and widow. I do not seek financial compensation but justice.