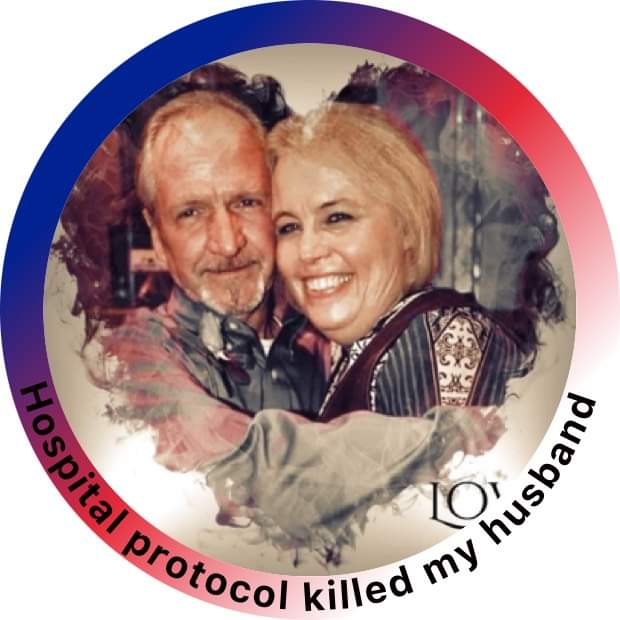 "They euthanized my husband, he didn't have to die."

Isolated from his wife, would not test again, keep him on covid floor, drugged him, erased the pics and videos from his phone, ignored his request not to vent

They refused to grant the family's request for an autopsy, even when they wanted to pay for it out-of-pocket. Why?

Janie and Larry Andrews lived in a small town called Theodore, Alabama and had been married 29 years. They had eight children between them, and they adored their twenty-nine grandchildren. Larry suffered from COPD, but it was under control. However, his oxygen was a little low on March 3, 2021, so they went to an urgent care for some supplemental oxygen, where they also tested him for covid. The test came back negative, and they sent Larry on his way with some O2 and antibiotics just in case something bacterial was going on in his chest. They did chest x-rays, which looked normal. Just 3 days later, on March 6th, Larry’s oxygen dropped again, and he went to MIMC hospital via ambulance.

The hospital tested him again for Covid and this time, they said it came back positive. The hospital admitted Larry and isolated him on the Covid floor where he was kept from his wife and family. Larry was hard of hearing, so Janie is not sure what he was able to understand about what was happening to him, and his wife was not allowed in to advocate for him. Of course, they asked Larry if he was vaccinated, and he admitted he was not. The treatment Larry received – and the way Larry was treated – changed for the worse the moment he disclosed his unvaccinated status, just as we’ve heard from so many other victims.

Larry and his wife made it very clear that he was not a DNI (do not incubate) nor a DNR (do not resuscitate), however, on his medical records they have him listed as both. The hospital started Larry on five days of remdesivir without consent from him or his wife, a violation of the EUA mandate. Larry kept a journal in the hospital, and it did not match up with the hospital’s notes. Janie requested another covid test be done, and they denied her request. Larry was alert, he was talking, he was calling, texting, sending pictures and videos.

On the 10th day they started increasing his oxygen and never told Janie why. Janie was also supposed to be with him starting on the 10th day but that, too, was ultimately denied, and he continued to be isolated. They gave him a mask that was too big, and withheld fluids, making him extremely dehydrated. Janie gave him drops of water which helped him almost wake up. They pumped him full of dangerous medications which were causing all kinds of problems.

Finally, Janie got six of their eight kids to the hospital to talk and be with their dad. Larry’s children decided to let their dad pass and end his suffering. Larry Andrews died on March 24th Covid-free, from complications of the FDA’s protocol and all the other toxic medications. Janie requested an autopsy that she was going to pay for out of pocket and they refused to allow her to have an autopsy performed because his death certificate listed him as a COVID death. In fact, he had been covid free for an entire week prior to his death, and likely never had covid to begin with. The hospital is likely to have made at least $100k off that diagnosis, however, profiting enormously from the pain and suffering they subjected Larry and his family to. This tragedy is yet another example of profits over patients, and another crime against humanity.