Relentlessly pressured to sign a DNR, attending physician said "You do realize (if we do CPR) it will crush his chest."

He was given meds that caused confusion, Dr admitted that to me. He fell out of his bed, so they tied him up for possibly 5 days. I have reason to believe he was not fed, I see a one time feeding of Protonix on medical records. I have pics of bruises as well as bed sores. He talked to me and told me he was man handled. I was also lied to about getting him on the vent to do 2 procedures, a CT Scan, the other a low lumbar puncture. He did not get the puncture and his health ins verified that, told me he was given a long list of drugs, you need an attorney. I asked more than once can I move him closer to my home, was told no, he will die. His skin on his eyes and mouth was shedding, I feel he was dehydrated. They never discussed treatment or told me he was tied up or any drugs given. I was informed about the Remdesivir. I found out thru an itemized bill that he was started on that upon entry. He was taken to the hospital for diarrhea and fatigue. A dr told me he had delirium from isolation. They would not allow him to have his clothes or CPAP machine upon entry, he did without his CPAP for 3 days, he was given his cancer meds incorrectly. I was also told they did not know what was wrong with him, he was a medical mystery, and one dr said if it is what we think it is, what quality of life will he have and what do we do with him. I have way more to tell..

How long was the victim on remdesivir?: 7 days

What types of activism: I have emailed many Senators in Congress, Dr. Pierre Kory, Dr. Peter McCullough, MD., One America News reporters 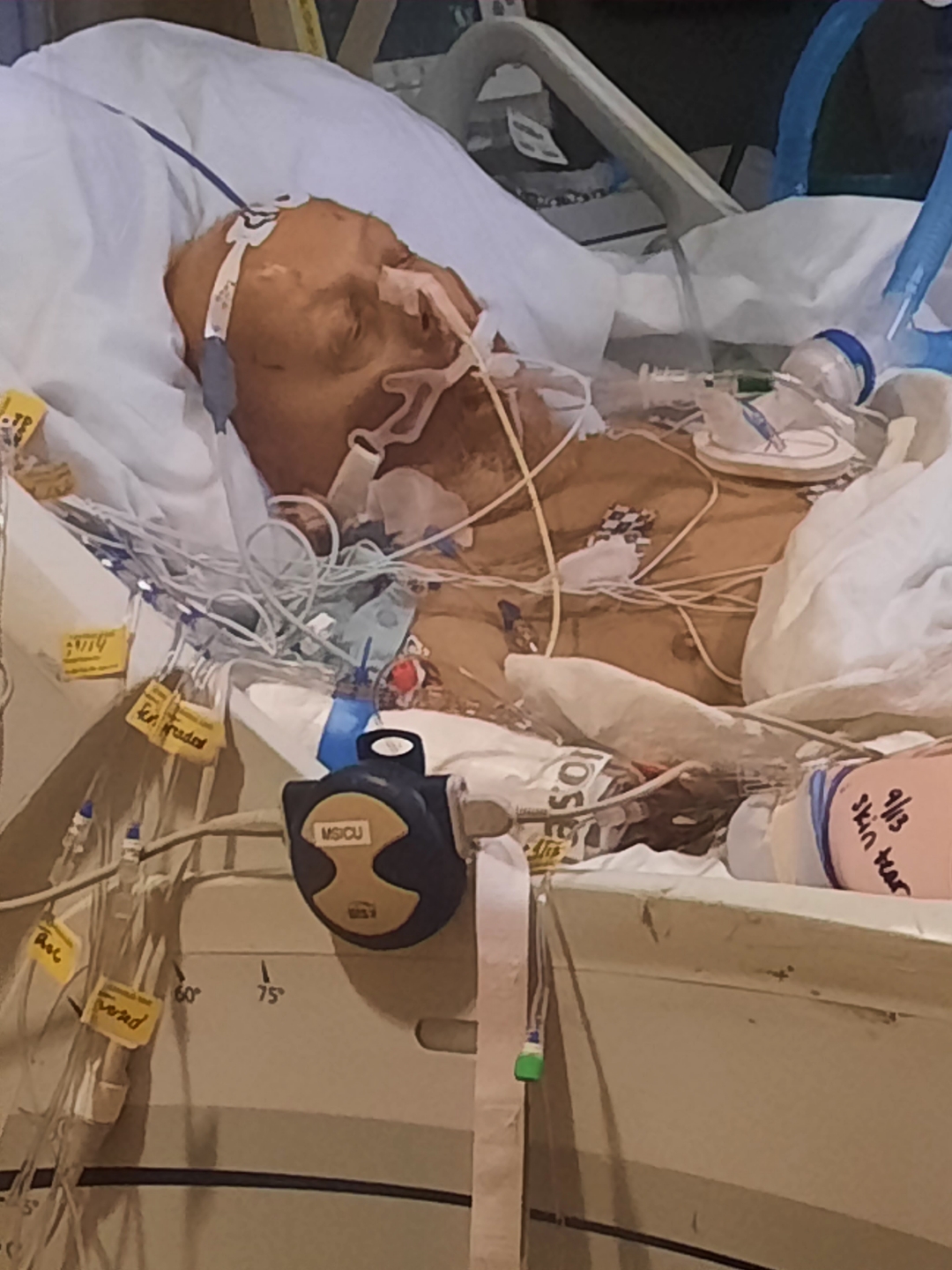 I have been praying for 10 months for God to bring this darkness to light. I live in mental hell everyday. No closure on his death. No goodbyes, no touch, no kiss, no nothing. It's hell...

I took my husband to MUSC in Charleston, SC for diarrhea and fatigue on Aug 29, 2021. Covid had been in our home, but isolated from him. When I got to the ER once they heard he “may” have been exposed, they made me go outside and sit for 6 hrs. I drove him 150 miles to what I thought was the best hospital for help. After I was told he’s covid and will need ICU for observation, I drove home alone. I called him the next day, he said he was fine, he wanted to come home, I said, “Dave, they said you had Covid and needed to get better”. I went down to see him on Thurs., as I had been told prior I could if I put on PPE, when I got to his floor I could hear him yelling my name, but I didn’t know where he was. I told his nurse I want to see him, she said you can’t. I told her to get his dr. once the dr came to speak to me, I asked to see him, I was given a monitor at the nurses station and that is when I found out he was tied up. He was looking for me as I was calling his name.

I talked to the dr. begging for Ivermectin and Hydroxychloroquine, he said I can’t, they (the hospital) won’t let us. I told him, it was all political BS, he agreed. So forcing me to leave this hospital alone without being able to connect with my husband. I went back on that Sunday, he was in ICU now and I was told we had 1/2 hr  to view him from his window, he was sedated so bad, he never knew I was there, he was chewing on his tongue, (which I feel it was drugs) that caused that. I was never given any form of a way to connect with him, no IPAD, no phone, nothing, they even took his cell phone away from him and locked it up on the floor somewhere.  I was told to leave the floor because, they had a situation in the hall. Our daughter asked them to give her antibodies to him, the dr told her, we don’t think it will work for him.

I got a call another night saying he needs a CT Scan and Lower Lumbar Puncture, so he needs to be on the vent, I okayed that vent for that purpose and told the dr, you get him off it as soon as he comes out of surgery.( his ins carrier said he never got that procedure and it was never approved, they also told me, he has a long list of drugs, you need a lawyer).  I don’t know if he was ever taken off it. I was called thru the middle of the night one night and told he’s not doing well, we shocked him, get here. When I drove 150 miles and got to ICU floor, rang the bell and was met by a very unfriendly nurse who told us you cannot be here, it’s not visiting hours. They let us in and we were met by at least 8 dr’s, nurses and techs with arms folded, like we were going to war. A dr began telling me they had worked on him for 6 hrs. Not even possible when I was called at midnight to, get to the hospital. At 9;30 pm that night, his night nurse told me he was fine and sleeping.

I was lied to on so many things. They never asked me if he could take any drugs, so they gave him fentanyl and he could not take it, I told them to get him off it, the dr said why, it’s a safe drug and “easy” to get. He was put on Seroquel for Schizophrenia, he was not one. He was kept sedated, never taken off Precedex. I begged for medical freedom, they denied him that. I also called ADA, he was a disabled man who now could not make choices or speak, they would not help me. I called the hospital liaison, they told me they could not do anything for me about visiting him. I saw him on Sept 15, 2021 and they called me at 3:00 am on Sept 16, 2021 and said he’s not making urine, there’s nothing left to do.

My daughter and I prayed and felt if that was where we were, then we will let him go. I left that hospital more than once with the feeling of having a heart attack, the stress was unbelievable. I do have reason to believe my husband was dead 2 days prior to his death date, because they finger printed him and put his print on stones, in my pics, before death day, there is black ink on his bed where his hand was and black ink on his fingers. I feel in my heart they murdered him in the name of money. The day after his death Sept 17,2021 this very hospital put on their web page, now offering Ivermectin Clinical Trials. Kicked me in my gut. I live in mental hell every day, I do not sleep well, I’m having problems with my heart, I can feel it hurting. I believe I have PTSD. His medical bill came in at 337,000.00 dollars, I know it was all about the money. I even shamed the dr’s for their behavior and not one said I am sorry. I pray daily in my walk with the Lord for justice.

Believe it or not…..wake up!

To: St. Anthony in Shawnee, OK.